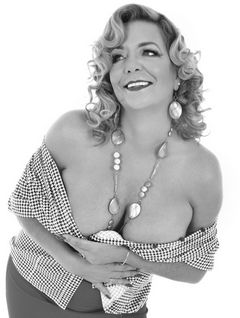 Public awareness of adult content and pornography made headlines in the early 1970’s, when movies like ‘Deep Throat’ with Linda Lovelace, and ‘Behind The Green Door’ starring Marilyn Chambers, were helping to shape the sexual revolution in a more explicit fashion. Throughout the remainder of the decade pornography remained primarily underground, in X-Rated movie theatres, peep-shows, and strip clubs.

By 1980 with the introducton of the VHS tape, pornography was now leaving the seedy theates and back streets and finding it’s way into American homes and Countries around the world. Names like Seka, Vanessa Del Rio, Aunt Peg, Jamie Gillis, and John Holmes were now filtering their way into the consciousness of society and quickly becoming celebrities in their own right.

This was the start of what is now considered ‘The Golden Age Of Porn’, higher productions values and a new crop of young willing performers were starting to push pornography into the mainstream. One young California girl who quickly became one of the top stars of the era was Karen Summer. Karen was a vivacious blond with a sexy slender body who was staring in some of the most popular movies of the time. You can see Karen in hardcore classics such as ‘Education Nina‘, ‘Taste Of Pink‘, her very own ‘Deep Inside Karen Summer‘, and ‘Lust In America‘. Karen appeared in close to 300 hardcore features from 1982 to 1994, she also traveled as a featured dancer and modeled for major mens magazines.

Karen now embarks on a new chapter to her career after a 25 year absence from the adult screen. We’re thrilled to now present an intimate conversion with this living legend as she talks about her most recent hardcore videos and website appearances, and what plans she has in the works for her new and long time fans.

Karen: Running into Nina Hartley in LV was all it took! Until that moment I had no intention of coming back. IT feels wonderful to be back in front of the camera, I had no idea I missed it so much!

Karen: By 1994 I had run the gauntlet of the adult industry, and most of the last 5 years of that I was on the road Feature/Burlesque performing. It was time to settle down and live my own life away from the spotlights.

Lusty-Mature: With respect to future projects you may be offered or involved with in the Mature Adult category, are there any scenes or fantasy situations you would like to be involved with on camera, i.e. younger guys, Mother /Daughter, etc.?

Karen: This whole Milf/Cougar world is now up for grabs and I want to taste every bit of it!!!

Karen: There is A LOT to be said for Time and Experience my friends! When you are young you won’t admit it…but there are no truer words spoken!

Karen: I ran into Jim South at El Torito while picking up my best friend (Mona Page) from work. He gave us his card and asked if we would be interested in Nude modeling. Back then that was how you started.

Lusty-Mature: What was you first experience in front of the camera like, what type of scene was it?

Karen: My first photo shoot (Summer of 82’) was with Bobby Hollander and it was exhilarating and scary all at once…..and I wanted MORE immediately! The first feature was “Shades of Ecstasy” and the cast was wonderful and fun and everybody knew everybody back then so we just had a blast with it all.

Lusty-Mature: How were you able to maintain such a long and successful career?

Karen: By mixing it up Stage, Screen, and Magazine! Of corse loving the spotlight and being an exhibitionist helps!

Lusty-Mature: Since your return to adult, how do you feel you have been received, have you heard from your long time fans?

Karen: As much as I wanted to come back, I didn’t think anybody would remember me. As it turns out “I have the best and most loyal fans any woman could ask for…they kept their fantasies alive until I came back. I am very grateful and humbled by them all.”

Lusty-Mature: What are some of your objectives or interests moving forward now that you’ve returned to the Adult Industry?

Lusty-Mature: Tell our readers what projects you have forthcoming, and how can they reach you, i.e. social media, websites? 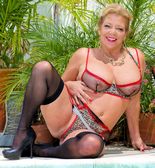